Temp 13 to 29℃. A few clouds in the morning soon turning to all blue skies, less of a cool breeze

Out of Avon:
Rosy Starling in Combwich, Somerset

Temp 15 to 28℃. A few clouds in the morning soon turning to all blue skies, a cool breeze again

Fine, sunny and baking hot - birders must have been deeply grateful for the easterly breeze.

Midsomer Norton:
Red Kite at 10.55 being mobbed by gulls over Somervale School.

Posted by Kittiwake at 6:46 pm

The heatwave continues- temperatures in high twenties in Bristol today. A breeze provided some relief.

Winterbourne:
Jay, Robin and Dunnock in the garden tonight

Clevedon:
Pied Crow is a sub-Saharan African species, though also kept in captivity. An individual has been seen in recent weeks in Yorkshire, then Norfolk (last reported from Cromer on June 23rd). Presumably the bird pictured is the one reported as a Hooded Crow yesterday.


Banwell:
These pictures show the different amounts of red on the crowns of two juvenile birds visiting our garden in Winthill, Banwell. [Left hand photo shows male, with extensive red on crown; juvenile female in right hand photo also shows red crown though covering a smaller area; in addition, black line above eye much thicker than on male - Twelfth Man]. Today they appeared separately but both have been seen at the same time previously. We haven’t worked out the relationships between them and the three different adult birds (two males, one female) that appear regularly.

BUPP update: Bath Peregrines juvenile TB hasn't been seen on St John's Church for a few days. Both adults appear to be spending time away from the church; hopefully they are supporting TB on his adventure. Any reports of juvenile sightings around Bath greatly appreciated by BUPP.

Hanham, 20,00:
Unsteady Juvenile Peregrine on top of pylon. Looked to be ringed on left leg. Adult peregrine also on pylon, maybe a 3rd bird lying on the ledge. The oaks by the viewpoint are full of purple hairstreaks. Max was 8 in a single view, felt like 20 or 30 swirling around

Burnett:
The Swallows and House Martins have quite a number of fledged young, they're feeding perched on the power wires, lots of coming and going and loads of chatter, beautiful to see them so close all sat on the wires in the food line

Monday 2nd July at West Wiltshire Crematorium, Devizes Road, Semington, Trowbridge, BA14 6HL. Arrive from 11.15 with service at 11.30.
Afterwards at Chippenham Golf Club, Malmesbury Road, Chippenham, SN15 5LT, 13.00 to 16.30. A memorial book will be available for people to write comments if they should wish to do so.
We are only having family flowers but Terry chose two local charities very close to us both for donations. These are Cat Protection Wootton Bassett Branch along with Oak & Furrows Wildlife Rescue. Cash donations will be split equally between the charities but any cheques will be given to the charity specified on the cheque and can be sent to the funeral directors quoting Terrys name. The funeral directors are FW Jones, 30 Market Place, Chippenham SN15 3HP.

BOC Peregrine Watch:
The Bristol Ornithological Club held the first of two Peregrine Watches at the Downs Watchpoint over the weekend. Two juveniles (a male and a female) fledged a few days earlier and were on view throughout both days. They spent most of the time in one of two trees across the Gorge. One was seen being fed on a Yew on two occasions. On Sunday morning they were calling loudly from a ledge near the Watch having flown across.
It was pleasing to be able to show them to so many interested members of the public. The adults were also seen regularly.

The second Watch Weekend will be held on the 14th and 15th July, 9am-5pm, when the youngsters should be trying out their new flying and hunting techniques

Bath:
Evening chorus - made up of  Blackcap, Blackbird, Songthrush and Robin.


Herriott's Bridge:
Out of area:
Golden Oriole at Speech House, Forest of Dean (per Birdguides)

Fine and sunny with a light wind, dry and warm - very nice.

Portishead:
a juv. Pheasant in my suburban garden - safer here than up by Weston Woods where it's likely to get shot.

More
f. Goldeneye on Tank no 3.

REMINDER:
This is the last day to email Medway Council about the planned destruction of the country's best Nightingale habitat.  To let them know what you think, follow this link:

The male Peregrine today outnumbered 3 to 1 by his partner & female chicks.

St George:
Male Blackcap - nice surprise to find one on the feeder.


Railway Ponds:
2 Mute swans with one sitting on nest. 1 Mallard.

Yatton:
2 Buzzard, 1 Hobby, 1 Kestrel, 1 Skylark ( still singing), 1 Sedge Warbler.
The Hobby took a Swallow right in front of me at low level at about its third attempt, watched by a circling Buzzard and a Kestrel on the pylon.

Weston-Super-Mare:
1 Peregrine - highlight of the airshow!

Bath - Northend :
Little Grebe breeding, Moorhen, no raptors at all this time, total of 7 Swifts over Northend village and probably the same scattered around over the local area. Eight House Martin nests, probably all occupied, around Eagle Road. House Sparrows holding up but sadly no Starlings or Swallows at all where there used to be several pairs of ea

Glorious sunny day, warm out of the light north wind.

juv Kestrel photographed in the Avon Gorge by Keith Fowler. 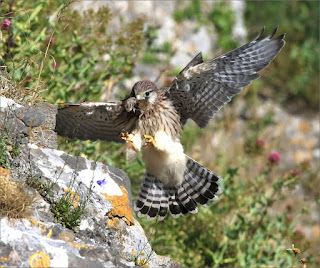 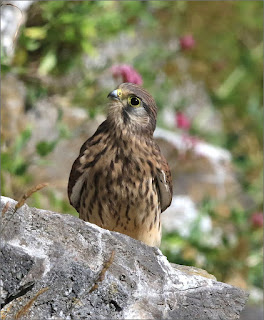 
Frampton Cotterell:
8 Swift tonight - best so far this month was 22

Battery Point area:
Siskin caught and ringed in a garden
Sedge Warbler singing in a park.

Swifts - 2 over Long Ashton and 3 over Nailsea this morning.

Posted by Kittiwake at 6:48 pm